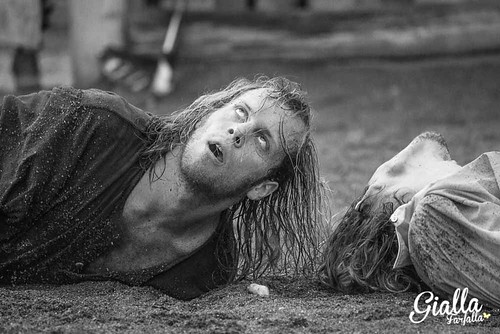 Dick Smith held his Father's simple, cool hand; a thin skin glove holding a few bones, keeping them from tumbling to the floor.
"Dick, get your sh*t together," his Father said.
He lived another four hours but said nothing more.
How could Dick have known then, in 2018, that now on his own death bed in 2060 his Father's last words would rattle around in his spent brain with the unbearable power of prophecy and certainty.

Both Dick and his Dad were Evangelical clergymen. Dick's Father persistently admonished him to be careful with his support of Donald Trump, warning him of the potential dire consequences of championing someone so obviously without a moral compass or significant humanity. Dick disagreed vehemently and spoke ill of his Father in Conservative circles.

Now, in his last moments, knowing the reality of it all, he wept. Dick's grandchildren worshipped at "The One True Sanctuary of the Immaculate White Turd." It was just one of the many new religions that had popped up after the reign of Donald Trump. A gaggle of others: The Temple of the Talking Tamale, Archie's Tabernacle (founded after an old copy of an Archie comic book was found to have healing powers) and The Shrine of Jesus' Socks also had legions of congregants. Catholicism was yet an ecclesiastical force -- finally truly finding itself as a couture and design powerhouse.

In the final seconds of his existence Dick looked out of his window into the waning desert light of the New Mexico evening. There, astride a dappled grey stallion, sat an elderly Native American man, his long silver braids seeming electric as he turned his horse westward, motioning for coyote and turtle to follow. Coyote paused and winked in Dick's direction. Turtle slowly raised a foot, waving goodbye...From "Being Dick in America" by Franklin Cincinnatus

Related Topic(s): America Is A Christian Nation; American Indian; Catholicism; Donald Trump; Evangelical; Race Native American- First Nation; Religion, Add Tags
Add to My Group(s)
Go To Commenting
The views expressed herein are the sole responsibility of the author and do not necessarily reflect those of this website or its editors.