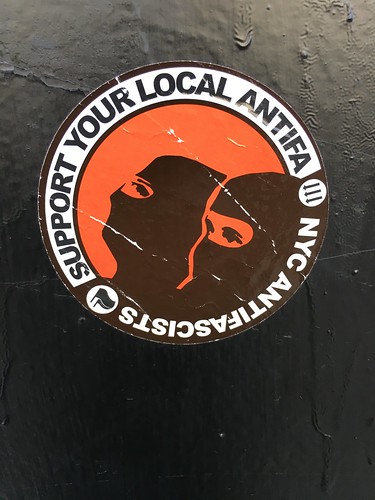 All "news media," especially TV, seeks attention by selecting the most vivid images they can find. Multiple shootings, bright flickering flames or emergency lights are favored Thus a (locally new) movement of young people called "Antifa," get undeserved negative attention. Do not let this happen to you based on those images and opinions of Fox newscasters and Infowars Alex Jones. Donald Trump, in appearance and behavior, is an unmistakable fascist. Some of his supporters are violent.

These "ALT-RIGHT" persons commit murder, beatings and other forms of illegal intimidation: bombings or anonymous death threats and open brandishing of guns. Fascism always has large groups of others that it blames for its problems and persecutes. Antifa is well known in Europe, whose peoples have endured struggles with fascists from the 1920's right up to today.

Fascism never comes in by honest election. It is motivated among people who feel downtrodden, resentful and feeds upon their hatred. It slithers into representative democracies by trickery, election rigging, subversion by foreigners, money and force.

Antifa people do a lot of nonviolent political activity. We are writers of editor letters, researchers, internet publishers, organizers of groups, political contributors. When fascism seeks to become accepted nationally, it's members don quasi-military uniforms, have parades, gather for speeches and concerts. When fascists seek in these ways to spread their poisons, Antifa seeks to stop them.

We have a slogan adopted from the Spanish Civil War, 1936 1939. It is "NO PASARAN!" They - shall not - pass. To maintain nonviolence so far as possible, we have an order of responses. When fascists lie publicly, Antifa will contradict it with truth. When they shadow groups of other people with bigotry, Antifa will cast light and redeem people. But when they attack innocent people (or us) with chains or bats or worse, we will defend innocent victims (and ourselves.)

Some Antifa, who favor street confrontation, favor a tactic called "Platform Denial," meaning that they are willing to disrupt government sponsorship of fascist speech. They are called "squads." Others, including myself, do not agree.

Related Topic(s): Alt-right; Antifa; Antifascism; Confrontation; Fascist, Add Tags
Add to My Group(s)
Go To Commenting
The views expressed herein are the sole responsibility of the author and do not necessarily reflect those of this website or its editors.