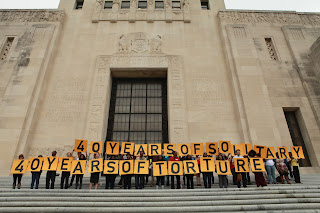 (PHOTO:  A3 supporters at the Louisiana State Capitol in Baton Rouge, April 17, 2012, exactly 40 years after Herman Wallace and Albert Woodfox were put in solitary confinement at Angola State Prison.)

We're holding great hope for Judge Brady's ruling on Albert's case and also for the ruling that could come any day for Herman from Judge Jackson.  Until then- we redouble our efforts to ensure that this travesty of justice will never again occur.

King is traveling to Philadelphia to take part in their 9/17 Rally Against Solitary and then back to the United Kingdom for multiple events. Supporters are as always, busy making films, writing articles, posting commentaries on social networks, visiting Herman and Albert.  It is time for justice for the Angola 3 and the far too many more prisoners enduring extended solitary confinement in American gulags.

Professor Bell pulled together our first ever Angola 3 Prayer service in Baton Rouge a couple of months ago  (view the program and photos from the service) and we're working with National Religious Campaign Against Torture (NRCAT) to see if we can collaborate on bringing information regarding solitary to the religious community in the south.

We hope our readers will sign the NRCAT and Amnesty petitions and spread the word: End solitary confinement and free all political prisoners!

Unfortunately, as often happens once the overburdened courts get rolling, the only legal headline is delay.  Albert is still awaiting the transcripts from his May hearing and consequently the submission of final briefs has been indefinitely frozen.  We will keep everyone updated as soon as the legal ball is rolling again.  Meanwhile, now might be a good time to drop a line to Albert letting him know he is still in our minds as he patiently awaits his fate.

Read our report from the May 29-31 evidentiary hearing here.

The A3 coalition has self-produced an edited, eight-minute video of the this past April's press conference on the 40th anniversary of Herman and Albert's placement in solitary confinement.

As previously reported, on April 17, 2012, Amnesty International was joined by a delegation of supporters, holding a press conference at the Louisiana State Capitol building in Baton Rouge, LA, and hand delivering to Governor Bobby Jindal's office the petition initiated by Amnesty International demanding the immediate release of the Herman and Albert from solitary confinement.

Governor Jindal refused to meet with the delegation despite several attempts made by Amnesty International to contact him in the weeks leading up to the petition delivery. Jindal ultimately referred the issue to the Department of Public Safety and Corrections. In response, the following month, Amnesty launched a new online petition directed to the Secretary of that department, James M. LeBlanc, still calling for Albert and Herman's immediately release from solitary.

PHOTO: Campaigners handing over a petition signed by more then 67,000 people in over 125 countries to the Governor of Louisiana, 17 April 2012. 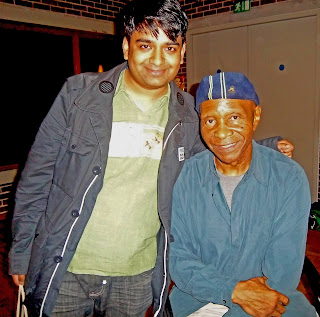 Robert King Connects with UK Activists
In July, Robert King was in London to speak at Amnesty Intl's screening of the UK film about the Angola 3, entitled "In the Land of the Free," While there, King met with Hamja Ahsan (in photo to the right, with King), the brother of Talha Ahsan, imprisoned since 2006 without any formal charges, and fighting extradition to the US on grounds that the US tortures prisoners with long term solitary confinement.
King also met with Aviva Stahl from CagePrisoners.com, a London-based human rights organization that is committed to defending the due process rights of detainees of the War on Terror. King's extended interview with Stahl has been published here.
.
This August, both Ahsan and Stahl were interviewed by Angola 3 News, further examining Talha Ahsan's case, as well as the joint appeal he is participating in to the European Court of Human RIghts. Following the Court's ruling against their appeal in April, they are now appealing to the Court's Grand Chamber, with a decision expected this month regarding whether or not it will even be considered. Read the full interview here.

If you're in London, check out their event on September 8, here.

Law Professor Angela A. Allen Bell's Law Journal Article about the Railroading of the Angola 3 into Solitary

Professor Bell meticulously documents how the Angola 3's continued placement in solitary has been facilitated by a fundamentally meaningless review process, arguing that "when prison officials stop acting as administrators and effectively begin handing down sentences, they, for all practical purposes, become judges. The Separation of Powers Doctrine prohibits prison officials from acting with this authority.". While noting that  the A3 case is part of a broader epidemic of human rights abuses in US prisons, Bell also proposes concrete solutions for making prison authorities more accountable in their use of solitary confinement.

Following the release of her article, Angola 3 News interviewed Bell about her interest in the A3 case, the legacy of slavery and why she thinks prison authorities still feel so threatened by what Angola Warden Burl Cain identified as "Black Pantherism." Read the full interview here.

The campaign to free Herman and Albert was the topic of a recent episode of San Francisco-based journalist and activist Kiilu Nyasha's television show, which can be viewed here.

In her most recent article, entitled "The Revision and Origin of Black August", Kiilu Nyasha, a longtime supporter of political prisoners writes:

A time to embrace the principles of unity and resistance, Black August had its origins in the "Black Movement" behind California prison walls in the 1960s, led by George Jackson, W. L. Nolen, James Carr, Hugo Pinell, Kumasi, Howard Tole, Warren Wells, and many other conscious, standup brothers who ultimately made it safe for Blacks to walk the yards of California's racist gulags. As the decades passed, the tradition of honoring our fallen freedom fighters - sparked by the August events described below -- was expanded to include commemorating revolutionary wars of resistance and self-determination, such as Harriett Tubman's Underground Railroad and the Haitian Revolution of August of 1791 culminating in the first Black Republic of the world.

End the Use of Shackles on Pregnant Women

An urgent online action campaign has been initiated asking California Governor Jerry Brown Governor Brown to sign AB2530, a bill that will "strengthen protections on the use of restraints on pregnant women in correctional facilities. Two prior versions of this bill passed both houses of the legislature without a single 'no' vote.  Last year, under pressure from the California State Sheriffs' Association (CSSA) and both Alameda and Sonoma County sheriffs' departments, Governor Brown vetoed the bill. AB 2530 addresses Governor Brown's veto by clarifying language and prohibiting the most dangerous forms of shackling. Take action here.
Learn more about the shackling of pregnant prisoners at www.BirthingBehindBars.org.

A diverse grassroots movement confronting the widespread use of solitary confinement in US prisons appears to be gaining momentum. On June 19, the Senate Judiciary Committee's Subcommittee on the Constitution, Civil Rights and Human Rights held an important public hearing on "Reassessing Solitary Confinement: The Human Rights, Fiscal and Public Safety Consequences," presided over by Chairman Dick Durbin (watch here). The Angola 3 submitted their own statement for the hearing.

Read an article by Time Magazine spotlighting the Angola 3 here.

EVERY 36 HOURS: The Extrajudicial Killings of Black People

Announcing the release of their July report on extrajudicial killings, the Malcolm X Grassroots Movement states: "A human rights crisis confronts Black people in the United States. Since January 1, 2012, police and a much smaller number of security guards and self-appointed vigilantes have murdered at least 120 Black women and men. These killings are definitely not accidental or random acts of violence or the work of rogue cops...The corporate media have given very little attention to these extrajudicial killings. We call them "extrajudicial" because they happen without trial or any due process, against all international law and human rights conventions. Those few mainstream media outlets that mention the epidemic of killings have been are unwilling to acknowledge that the killings are systemic - meaning they are embedded in institutional racism and national oppression.

Over 40 years ago in Louisiana, 3 young black men were silenced for trying to expose continued segregation, systematic corruption, and horrific abuse in the biggest prison in the US, an 18,000-acre former slave plantation called Angola. In 1972 and (more...)
Related Topic(s): 2012; Angola State Prison; Freedom; Judiciary; Law; Oppression; Police; Resistance; Rights; Torture; (more...) Torture; Women, Add Tags  (less...)
Add to My Group(s)
Go To Commenting
The views expressed herein are the sole responsibility of the author and do not necessarily reflect those of this website or its editors.