Republicans and Democrats have, together, governed us miserably negligently. Their major laws, like Free Trade, have enabled job destruction, exposed us to war, terrorism, and mass shootings. They have never effectively combated the harms that have happened to us. They have left us with an electoral system so defective that it installed Trump.

Millions of Americans would be more secure and happier under a Social Democracy. Social Democracy is the Scandinavian compromise that has large, regulated private corporations (even billionaires) that cooperate with the regulating government. Social Democrats in America (such as Senators Bernie Sanders and Elizabeth Warren) are marginalized by the big money funding Republicans and Clinton - type Democrats and distraction by our trivia - focused media.

With sufficient social democrats elected we could repeal the tax cut, and end our wasteful wars. $1.5 - $2.5 trillion saved could be spent on decent wage jobs in federally funded infrastructure repair, etc. A lot of new candidates have emerged since Trump's election. A remote chance of identifying and electing such unknown, under - resourced candidates would exist, if prominent social democrats like Bernie Sanders were to launch a sudden endorsement cascade, 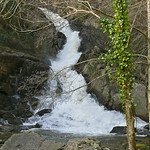 La Grande Cascade berniedup at flickr.com/people/65695019@N07/ License: Attribution-ShareAlike License
(Image by berniedup)   Details   DMCA
a couple months before the party nominations for the election of 2020. I'd vote for someone unfamiliar to me but endorsed by Sanders, or Warren, etc., over any Republican or Democrat party - endorsed candidate who refused to advocate for litmus test proposals. These would include repealing the tax cut , stopping the Afghan war entirely, and a major Congressional increase in the money supply (e.g., $2 trillion) dedicated to federal financing for living wage jobs in infrastructure repair.